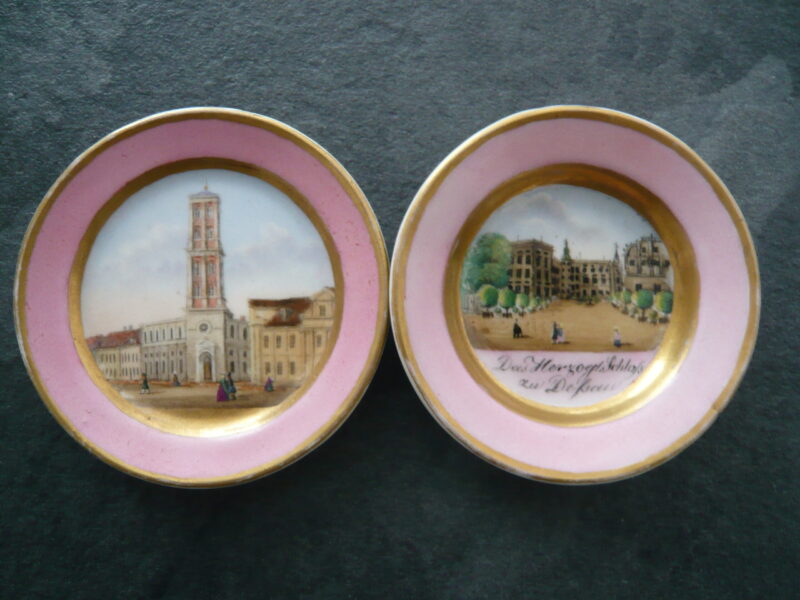 Entrance from the museum

Exhibition in the Museum of City History/ Johannbau

In August 2021, two tiny plates (dm. 6.8 cm) from the 2nd half of the 19th century gave cause for joy to the Museum für Stadtgeschichte Dessau. Mrs. Gisela Schaube from North Rhine-Westphalia, a great-granddaughter of the former owner, made them a gift to us. Since then, the plates have enriched the porcelain holdings in the collection, which also includes valuable unique pieces from the collection of the former court clockmaker Fritz Seelmann.

The owner of the plates was Gerhard Heine (1825-1910), a native of Dessau. He had studied theology, philosophy and philology in Halle and later worked as a regional seminary director in Köthen. He was also active as a writer. In 1866, for example, the “History of the Land of Anhalt and its Princes” was published. In 1864 he married Elisabeth Schubring, daughter of the theologian Julius Schubring from Dessau.

The motifs of the small plates show historical buildings relevant to the city: The former Leopold-Dank-Stift was built by Prince Leopold Maximilian in 1746-1750 as a monastery building to house elderly war invalids. Formerly, a tall sandstone obelisk standing on four columns adorned the corner building. In 1838 this was demolished due to dilapidation. The tower in its present form was built in 1847-1850, modeled on the campanile at the Hospital of St. Spirito in Rome. Since 1927, the building has been the seat of the Dessau Museum of Natural History and Prehistory.

The second plate shows the three-winged complex of the Ducal Dessau Residence Palace. At that time, the courtyard was still decorated with beautiful potted plants. During the Second World War, the palace fell victim to bombs dropped over the city. Shortly after the war, the east and south wings were demolished. The only surviving wing, the Johannbau, remained as a wartime ruin until the fall of the Berlin Wall. Today it houses the Dessau Museum of Urban History.

The press marks on the bottom of the plates refer to the Königliche Porzellanmanufaktur Berlin. Presumably, they were purchased as white ware (i.e., unpainted) from KPM and then finished in Dessau. Here, in Oct. 1875, a manufactory of the porcelain painter August Arnbeck, who came from Neuhaldensleben, opened in Askanische Straße 3, where self-painted porcelain was fired. Arnbeck operated his trade until his death in 1903. The processing in this manufactory is not one hundred percent certain, but it is obvious. Collecting porcelain was a hobby in the 2nd half of the 19th century. 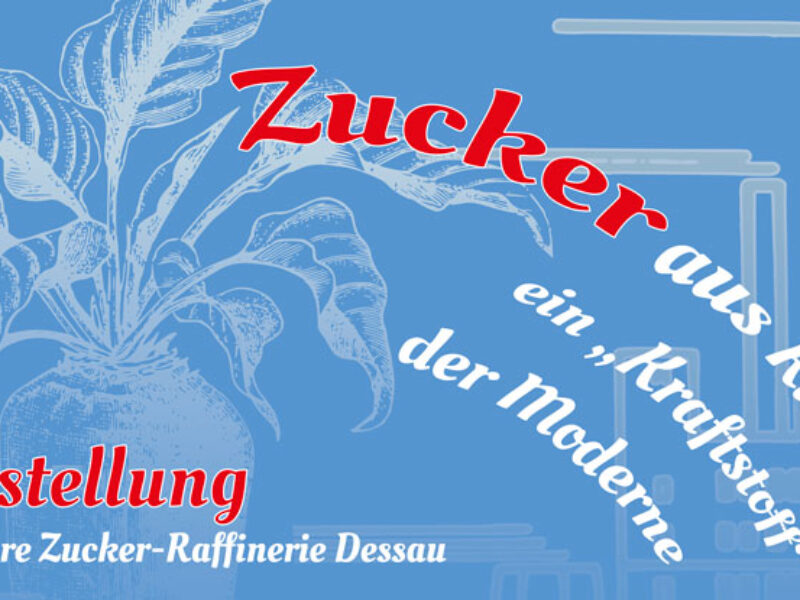 Exhibition in the Orangery at Georgium Castle

Sugar from beets - A "fuel" of the modern age

The Dessau Sugar Refinery was founded on June 14, 1871 and entered in the commercial register on September 1, 1871. The company was founded in order to put into industrial practice the process developed by chemists Max and Emil Fleischer for extracting sugar by desugaring molasses with the aid of strontium compounds.
This process made it possible to produce consumer sugar easily and inexpensively.

The sugar refinery developed into one of the most important economic enterprises in our city, which also included the Strontian and potash factory in Roßlau. To mark the birth of the Dessau Sugar Refinery 150 years ago, the Dessau-Roßlau City Archives and the Dessau Museum of City History are currently preparing an exhibition entitled Sugar from Beets – A “Fuel of the Modern Age”, which will not only shed light on the history of the Dessau Sugar Refinery up to today’s Gärungschemie Dessau GmbH.

The cultivation of sugar beet and the beet sugar industry were also associated with modern technical developments and numerous innovations in agribusiness, mechanical engineering, the chemical industry and food and luxury food production, but it also had a major influence on everyday life, politics, culture, migration and numerous other areas of society.

These complex interrelationships are examined for the first time in the exhibition for Dessau-Roßlau and the Anhalt region using numerous objects, models, graphics, photos and film footage.
Sugar was once a luxury good. However, with the growing production volume of beet sugar, from the last third of the 19th century at the latest, members of the poorer classes of society were also able to afford sugar for sweetening coffee or tea and sugary products such as sweets, jam, sweet pastries, cakes and pies. Probably every family had sugar containers in the pantry or sugar bowls on the dining table. These changes in the everyday life of people will also be shown in the exhibition. 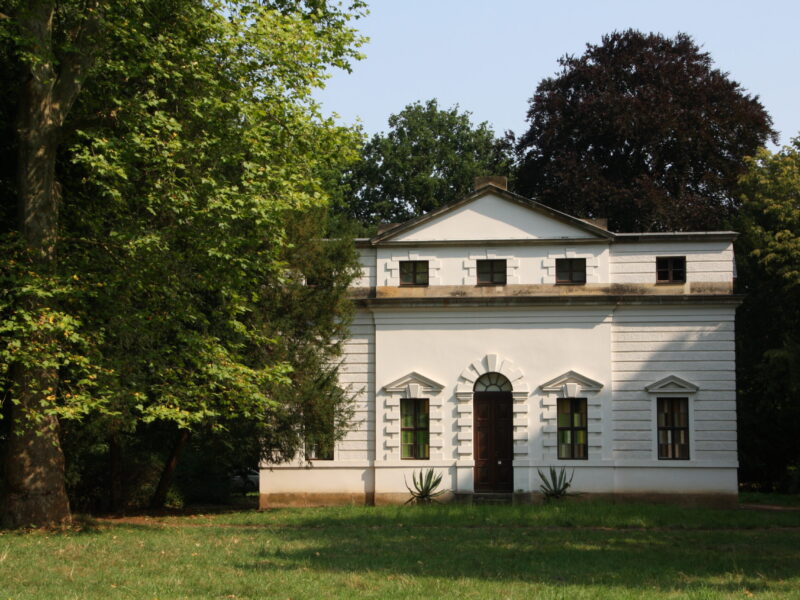 Photo exhibition in the Fremdenhaus

In November 2020, things went quiet. In theaters, in museums, on large and small stages. With her camera, Dessau photographer Juliane Naumann has tried to give a voice to the silenced artists and cultural workers.

35 of her black-and-white photographs will now be presented on larger-than-life banners in the Fremdenhaus at Schloss Georgium from August 1, Thursdays to Sundays from 12 to 5 p.m., together with quotes from the people portrayed. Juliane Naumann: “Even if the acute lockdown is over at the time of the exhibition, the silent months remain in our cultural memory.
The photographs in the FERMATE series highlight the importance of art for our humanity and our identity.” Juliane Naumann was born in Dessau, Germany, in 1975. After specializing in people photography in 2011, she has been working as a freelance photographer focusing on portraiture and reportage in Dessau since 2017. The exhibition FERMATE is a project of Juliane Naumann Photography, Dessau-Roßlau, sponsored by the city of Dessau-Roßlau and supported by the Anhaltische Gemäldegalerie Dessau. 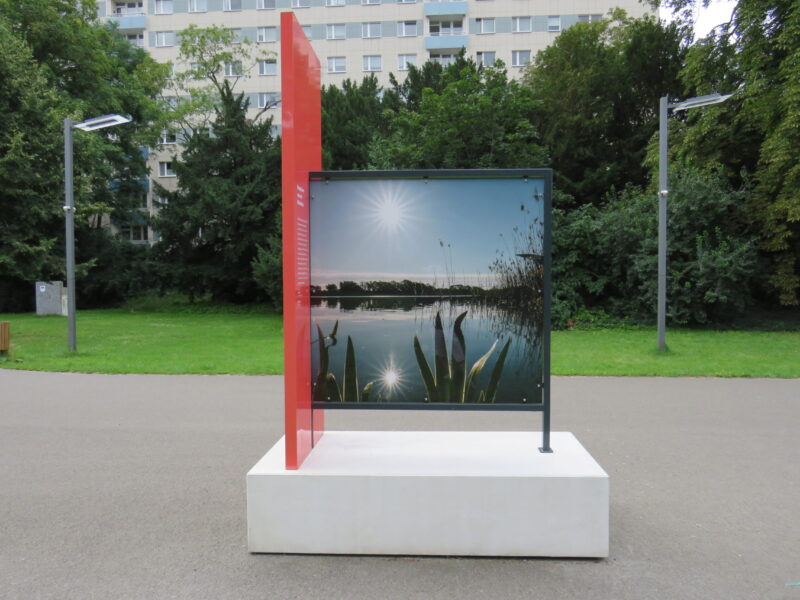 The exact locations of the picture banks can be found on the map on the exhibition page.

If you have any questions, please contact the Tourist Information Dessau.

Take your time for a walk through the city and discover the most beautiful places of Dessau-Roßlau as photo impressions on an approximately 3.5 km long circuit between the train station and Kavalierstraße.

In this interesting format, the temporary exhibition presents appealing topics such as urban development, urban history and urban culture.

Local and regional photographers were asked to send in their very personal and most beautiful views of the sights of Dessau-Roßlau. The impressive results can be viewed on a walk through the city, can also be experienced digitally and inspire people to visit the original sites.
The photo impressions will be on display until spring 2022. After that, the exhibition will change thematically. 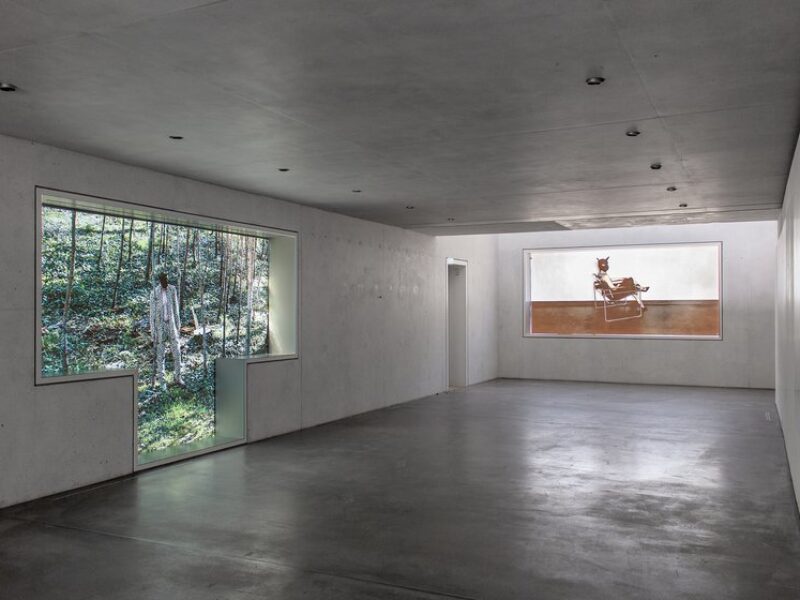 Over the past weeks and months, the artists Sofia Dona and Andrea Acosta as well as the writer Mara Genschel have dealt intensively with the UNESCO World Heritage Site of the Masters’ Houses in Dessau, but also with various infrastructures. New, impressive works have emerged that bring the often hidden foundations of everyday life to light. In terms of content, they deal with everything from hunting and publishing to the stones with which the Masters’ Houses were once built.

This year, the Bauhaus Dessau Foundation is increasingly focusing on the topic of infrastructures as part of its programmes. The traces of the exploitation of resources that modern comfort had as its background are still present in the landscape around Dessau today. The structural legacies of Bauhaus modernism form an ideal starting point for critically questioning the connection between modernism and its infrastructure.

A programme in cooperation with Literaturhaus Berlin and Galerie für Zeitgenössische Kunst, Leipzig. 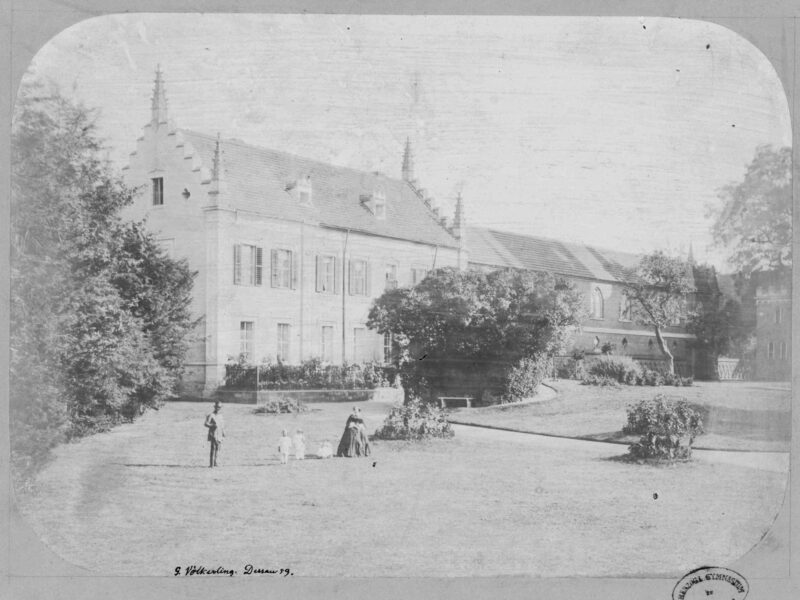 Black and white. Photography in the Garden Kingdom.

On the occasion of the anniversary “20 years UNESCO World Heritage Garden Kingdom Dessau-Wörlitz”, the Cultural Foundation has selected 35 historical photographs from the Garden Kingdom for public presentation, which are presented in juxtaposition with current photographs of the respective situation from the year 2021. The counterparts show the eventful history of change of the palaces and garden architectures as well as the gardens and parks, open up exciting possibilities for comparison and bring surprising insights for the viewer’s eye.

In the picture archive of the Kulturstiftung Dessau-Wörlitz, 492 glass plate negatives of photographs from the Garden Kingdom of the 19th century have survived.

Further historical views up to the middle of the 20th century were collected in cooperation with the Dessau City Archive, the Dessau Museum of City History, the Anhalt Picture Gallery in Dessau, the Brandenburg State Office for the Preservation of Historical Monuments and the Archaeological State Museum/Messbildarchiv. The Cultural Foundation can now present its visitors with photos from Dessau, Oranienbaum, Mosigkau, Mildensee, Vockerode, Großkühnau, the Georgium, Wörlitz Park, the Luisium and Sieglitzer Berg, which date back to the pioneering days of photography.
Historical photographs are important evidence for the preservation of architectural and garden monuments. On the one hand, they accurately depict the situation at the time the respective photograph was taken and allow direct comparison of different phases of condition. On the other hand, they bear witness to developing pictorial-artistic qualities. It is thus possible to explore how buildings and gardens were treated at different times and how landscapes have changed. Fashionable influences are depicted as well as losses due to war or urban developments. Research in art history and garden history must evaluate and discuss these pictorial documents accordingly and can thus provide valuable support for the preservation of monuments.

An accompanying catalog has been published for the exhibition. Here, not only has the history of photography in the Garden Kingdom been summarized in an essay by Uwe Quilitzsch and Jana Seeger, both staff members of the Department of Palaces and Collections of the Kulturstiftung, but also the garden and architectural history findings, which
the observation of the historical photographs are examined in more detail. 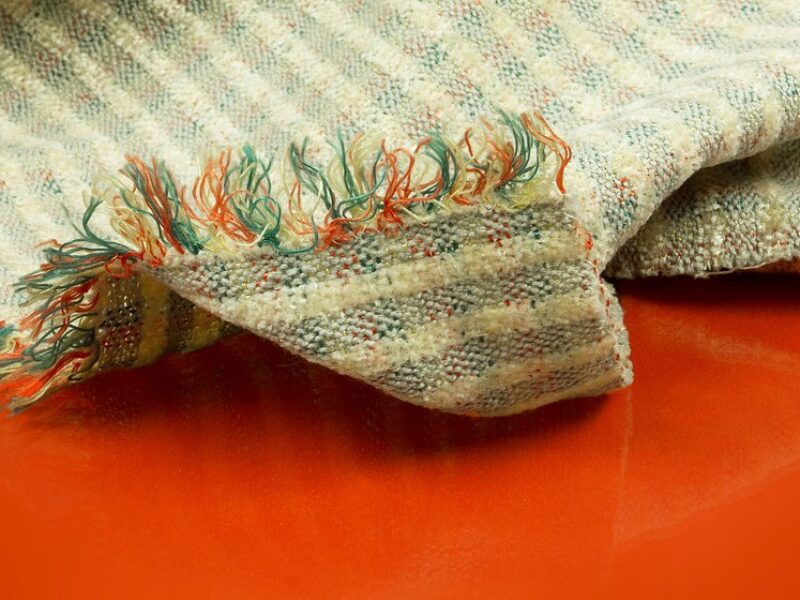 Otti Berger is the subject of two linked exhibitions. After Otti Berger’s murder in the Auschwitz concentration camp, her textile work was scattered incoherently in archives throughout the world. Berlin artist Judith Raum has developed two installations for the Bauhaus Dessau Foundation formed of fragments of this oeuvre. In the Intermezzo in the Bauhaus Museum Dessau she juxtaposes four of Berger’s original designs from the thirties to designs that were still created at the Bauhaus Dessau. In this way she pursues the question whether fragments of a once continuous practice might be reassembled into a cohesive narrative

For the largescale installation in the former textile workshop in the Bauhaus Building Judith Raum, after complex research and collaborative work, had one of Berger’s curtain fabrics rewoven out of the last Bauhaus collection, creating a stage for the yardage together with new video works that reflect conflicts and setbacks encountered during the work. 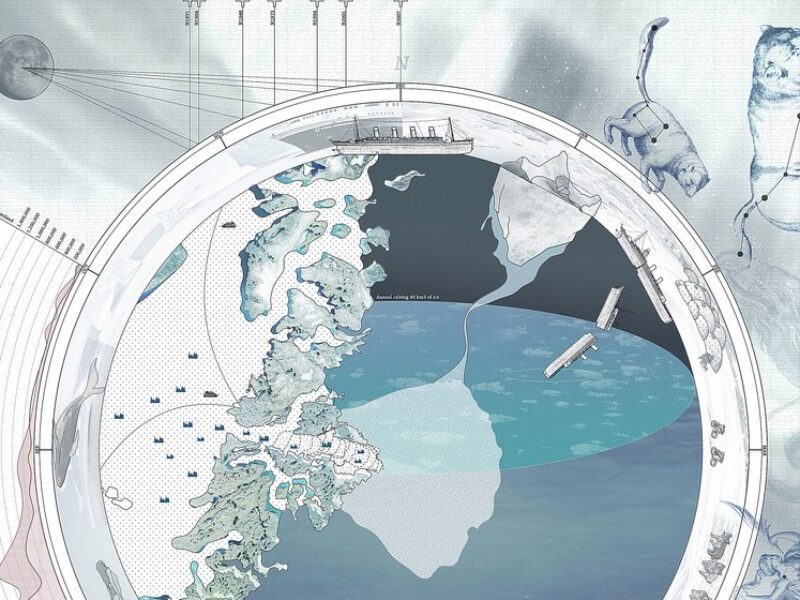 COVID-19 nearly brought global tourism and its infrastructures to a standstill. The resulting vacuum offers an opportunity for thinking of ways to address the collective responsibility involved in inheriting a planet amidst climate crisis. For this Intermezzo, El Hadi Jazairy and Rania Ghosn of Design Earth showcase 10 iconic UNESCO world heritage sites as figures of the climate crisis. Their aim is to ground our abstract imagination of the climate crisis in these familiar and symbolically significant places. The case studies also provide crucial examples of a wide range of climate effects, from rising sea levels to species extinction and melting glaciers. Taken together, Climate Inheritance visualizes events and values that divide and define our planetary past and future, including systemic patterns of violence, racism and displacement.

Grasping Infrastructure. On Collecting and Curating

What path does an object take before it ends up in a museum? Where did the material for the prototypes of design classics come from? Can a unique work of art be re-created? How does a design idea become a hit with the public? Two Intermezzi in the Experimental Space examine the infrastructure of collecting. Visitors are invited to search for select items in our collections. Through playful exploration they discover facts related to the provenance, materiality, collector’s value, restoration and popularity of an object and thus learn about its history. In doing so, they also become exhibition organisers themselves: using a pin board, they exhibit their favourite objects and explain why these should be featured in an exhibition.
(Source: Stiftung Bauhaus Dessau)