Dessau is the town with the closest associations to the Bauhaus. No fewer than three sites are UNESCO World Heritage Sites: the Bauhaus Building, the Masters’ Houses and the Houses with Balcony Access (Laubenganghäuser). From the Kornhaus on the Elbe to the Employment Office and Törten Housing Estate, Bauhaus architecture is omnipresent.

There are more than 300 Bauhaus buildings in Dessau, where the school of art and design founded in 1919 enjoyed its heyday starting in 1925. The Bauhaus principle of “form follows function” can be seen here to full effect, as can the artistic work of the Bauhaus masters, such as Walter Gropius, Marcel Breuer and Wassily Kandinsky.

Bauhaus Museum Dessau, which opened in 2019, shows the world’s second-largest collection of Bauhaus exhibits and tells the story of the Bauhaus as a school.

The cathedral of Modernism

This is probably one of the most-photographed buildings in Germany and stands more than any other as a symbol of Modernism – the Bauhaus Building, the home of the eponymous school from 1925 to 1932.

Walter Gropius, the architect of this still revolutionary-looking building, structured the Bauhaus as a building with several sections. The first thing that catches the eye has to be the huge glass curtain wall of the workshop wing, to which the flat cube of the stage and canteen is adjoined, dominated by the five-storey studio building with its striking balconies.

A bridge linked the building of the former vocational training college to the workshop wing. Among other rooms, the bridge housed Gropius’ architectural design practice. While the “typical” Bauhaus white, set off with black and grey, dominated the exterior, the interior is surprising, with subtle colours that emphasise the structure of the building.

While Dessau’s town council had shown courage in the 1920s and brought the Bauhaus, which was reviled in Weimar, to the town, the tide turned in 1932. Under pressure from the now stronger National Socialists on the town council, the school was banished and, after a brief interlude in Berlin, closed in 1933.

In the GDR, the Bauhaus was for a long time ignored, but in 1976 it was lavishly restored. Today, it houses the Bauhaus Foundation (Stiftung Bauhaus) and is a place of research, teaching and design, exhibitions and concerts – and a place that no visitor to Dessau should miss. 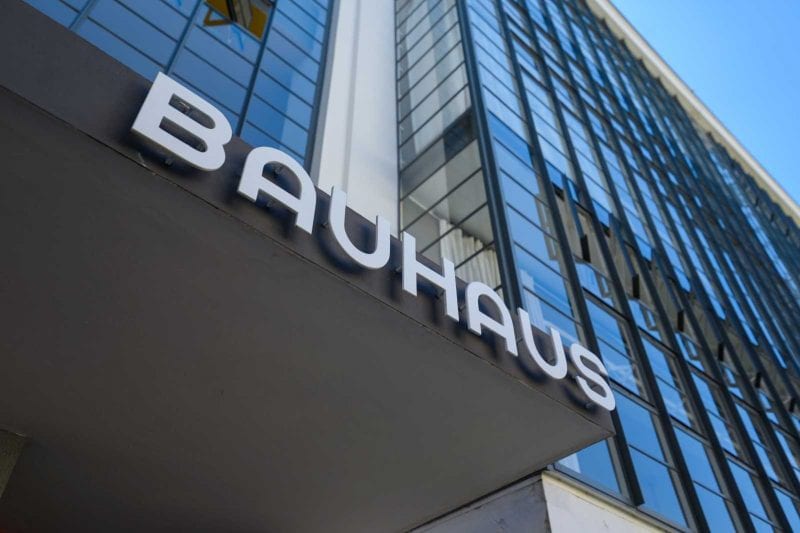 The homes of the Bauhaus masters 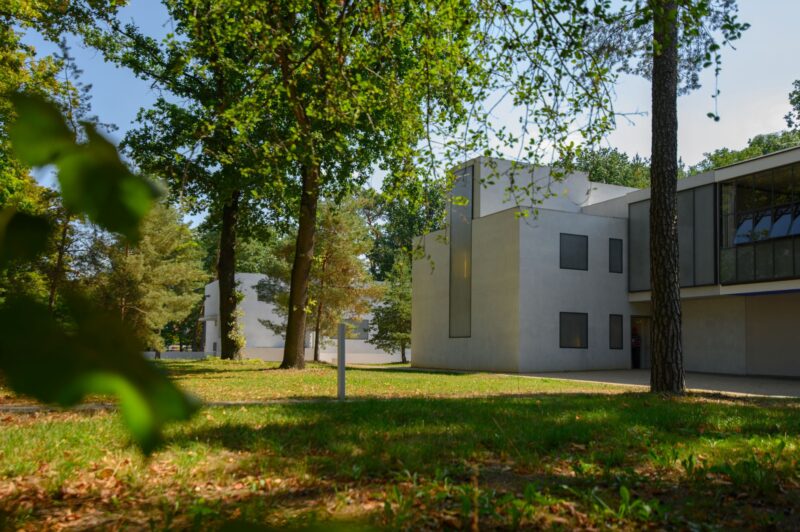 Three semi-detached houses for the Bauhaus masters and a single house for the director were built at the same time as the Bauhaus building. The first residents were Walter Gropius, Lyonel Feininger, Paul Klee, Wassily Kandinsky, László Moholy-Nagy, Oskar Schlemmer and Georg Muche with their families.

The houses gain their shape from nested cubic bodies of different heights.

While the houses themselves were identical in construction, the residents had their own ideas about the furnishings and colour scheme. This is particularly evident in the Klee/Kandinsky semi-detached house.

The Director’s House and the Moholy-Nagy House were destroyed during the war and reopened in 2014. They were deliberately not built true to the original, but impress with an architecture of blurring.

Bauhaus Museum Dessau presents the outstanding collection of the Bauhaus Dessau Foundation in a permanent public display. Located in Dessau’s town centre, it was built to plans by the Spanish firm of architects González Hinz Zabala and opened in September 2019.

The centrepiece is the Black Box, designed to house the treasures of the new Bauhaus Museum. And the Bauhaus Dessau Foundation has a wealth of such treasures to draw on: with more than 50,000 exhibits, its collection is the second-largest in the world on the subject of the Bauhaus. The foyer is freely accessible and is used as an open stage for contemporary artistic ideas and events.

The exhibition in Bauhaus Museum Dessau is entitled Versuchsstätte Bauhaus. Die Sammlung (literally “The Bauhaus as a place of experimentation. The collection”). It describes the Bauhaus as a lively place where people learned and taught, conducted artistic experiments and worked on industrial prototypes. The collection consists mainly of students’ work, records of lessons, and designs and prototypes from the workshops.

This is why the exhibition Versuchsstätte Bauhaus focuses not on the famous design icons and their masters, but on the school and its students: the routine learning and teaching, between free design and industrial prototype, artistic experimentation and economic pressure, a training centre and a place of emancipation. The themed sections concentrate on the teaching concept and actual teaching, the Bauhaus as a versatile “testing ground”, a partner of industry and an avid communicator. 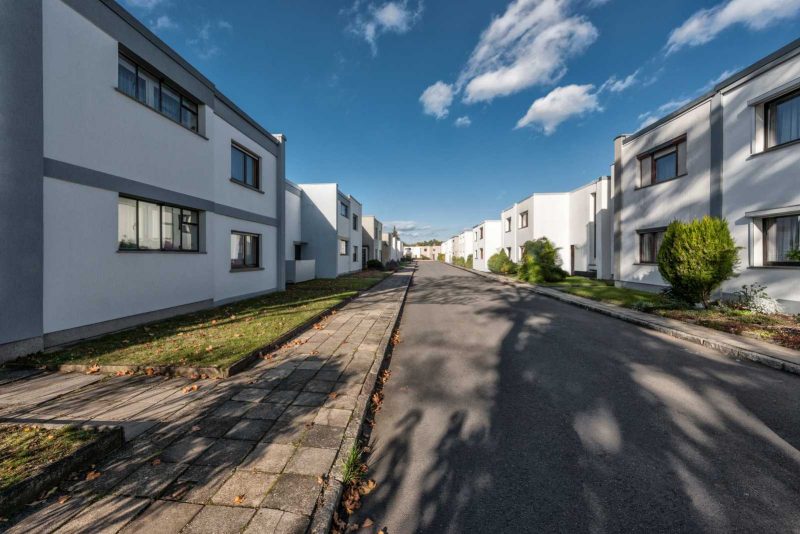 The lack of cheap housing, further exacerbated by World War I, led to increased public effort to build houses in the 1920s. The aim was to create affordable housing on the premise of light, air and sun. Built between 1926 and 1928 on behalf of the town of Dessau, the houses of the Törten estate belonged from the outset to the residents.

Gropius designed the terraced housing estate with kitchen gardens for self-sufficiency. In three construction phases, 314 terraced houses were built, with 57 to 75 square metres of living space depending on the type of house.

The light-coloured cubes are semi-detached houses that are mirror-images of one another, with four to twelve units grouped together. The façades were broken up by windows forming vertical and horizontal bands. The interiors were also painted in light colours. The design of the houses was based on the premise of low-cost construction: the load-bearing walls were built with in pre-fabricated, low-cost hollow blocks made in slag concrete, the ceilings with reinforced concrete girders.

However, shortly after completion, construction and planning defects became apparent, as a result of which the residents soon made numerous modifications (especially to the layout of the windows).

The house at number 38, Mittelring was the first to be restored to its original state, starting in 1992. Today, it is used by the Moses Mendelssohn Society and can be visited, as can the house at number 5, Kleinring.

A former granary gave the name to this restaurant for day-trippers, which was built on the banks of the Elbe in 1929-30. The Kornhaus is still a popular destination for excursions even today. And no wonder, because it stands in one of the town’s most beautiful locations.

Although the design by Carl Fieger, who worked as a draughtsman in Walter Gropius’ studio but also had his own design office, did not win a prize in the competition for which it was produced, the architect was commissioned to build it – presumably mainly for economic reasons. The building is a mixed construction of brick masonry and reinforced concrete columns.

The individual cubic structures are grouped around the kitchen and yard area.

On the upper storey there is a dance hall and the restaurant area, from which you have access to the terraces overlooking the Elbe. The semi-circular porch on the western side was originally planned as an open balcony, but was glazed even as it was being built. The standing beer hall on the lower floor has a separate entrance.

The Kornhaus has undergone alterations on several occasions, but its original character has largely been preserved. In 1996, the Kornhaus was renovated in keeping with its status as a listed building. 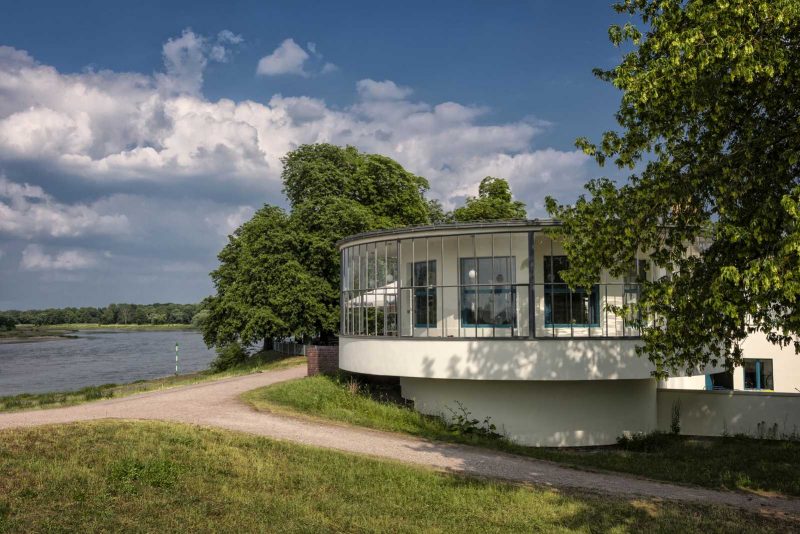 An architectural example of the Bauhaus precept

One excellent architectural example of the Bauhaus precept, according to which form follows function, is the Employment Office, designed and built by Walter Gropius.

After the introduction of compulsory unemployment insurance and its merger with the employment services in 1927, the town launched a competition for the construction of an employment office.

Walter Gropius was awarded the contract in 1928 and construction was completed by May 1929. Gropius geared his design strictly to the rational organisation of the work processes of the new building. He designed an elongated, two-storey office block and a circular, one-storey building in front with a glass sawtooth roof for the public.

With five separate entrances and communicating offices, as well as a central cash desk area, everything in this circular structure was designed to ensure a smooth handling of traffic.

Since its renovation in 2002-2003, the brick-clad steel frame building has been the headquarters of the Dessau-Roßlau Office of Public Security and Order.

Historic Employment Office
Today you will find the Office of Public Safety and Order here. This is currently not open to the public due to Corona restrictions.

Free entrance and guided tours for persons under 18 years.

Free entrance to the Bauhaus building, the Masters’ Houses and the Bauhaus Museum Dessau.